Zika: When Zika became a serious concern in early 2016, projecting the magnitude of the epidemic was a major priority for public health officials. Less than two weeks after the WHO declared the Zika epidemic an emergency, we published a preprint that made high-resolution projections of the number of people that could become infected. Later published in Nature Microbiology, these projections were based on a new method we developed to relate environmental variables to epidemic size based on their theoretical relationships with the basic reproduction number, R0. New work of ours at medRxiv synthesizes data from health surveillance and cohort studies to estimate that 132 million people (95% uncertainty: 111-170 million) may have been infected. This is similar in magnitude to our projection of 93 million (95% uncertainty: 81-117 million) at the beginning of the epidemic, which demonstrates the utility of our approach to projecting epidemic size as a function of high-resolution environmental and demographic data.

Chikungunya: We have also been active in making use of temporally resolved data to map infectious diseases. Much like Zika, chikungunya recently swept across the Americas, but estimates of how many people it infected and where are lacking. This gap makes it difficult to anticipate the risk and whereabouts of future outbreaks, which is essential for planning vaccine efficacy trials. Surveillance data are only available at a national level in most countries, which limits the precision of mapping based on existing approaches. With support from a DARPA Young Faculty Award and DARPA Director’s Fellowship, we are using an environmentally driven transmission model to downscale incidence patterns, resulting in projections of infection attack rate subnationally. In a paper in BMC Medicine, we validated this approach with subnational data from Colombia. As part of this project, we are also interested in projecting chikungunya epidemic size in populations with pre-existing immunity.
​Yellow fever: In a different context, we are developing new approaches for incorporating transmission dynamics into maps of yellow fever. Existing approaches focus exclusively on human infections originating from zoonotic spillover. In areas with Ae. aegypti mosquitoes, human infections can also arise from urban transmission. Our approach acknowledges the possibility that both forms of transmission may contribute to the burden of yellow fever under the right circumstances. Work to develop this approach and to apply it to mapping the impact of vaccination against yellow fever is being supported by VIMC.
2. Model-guided assessment of interventions for infectious disease prevention
Mathematical modeling has a key role to play in designing and interpreting studies to assess intervention efficacy and to make projections of the impact of interventions when deployed at population scales. The second theme of our research seeks to advance these capabilities for prevention of mosquito-borne diseases.

Dengue vaccines: We have played a prominent role in work to assess the potential impact of new and forthcoming dengue vaccines. This includes being one of eight groups to contribute to an effort organized by the WHO to project the public health impact of the Dengvaxia vaccine, as described in a paper in PLOS Medicine. More recently, we published a paper in PLOS Neglected Tropical Diseases that addresses new questions about use of Dengvaxia following screening for prior infection, a new requirement by WHO. Looking ahead to other vaccine candidates on the horizon, we published a paper in PLOS ONE that quantifies biases in estimates of dengue vaccine efficacy owing to complexities of dengue biology not accounted for in trial design. We published another paper in PLOS Computational Biology that shows how limitations associated with information gained from vaccine efficacy trials translates into considerable uncertainty in projections of a vaccine's impact. With support from an Indiana CTSI Postdoc Fellowship, Guido España is extending our agent-based model for dengue in Iquitos to other settings, allowing for realistic simulation of multi-site trials that will improve our ability to glean information from future trials of vaccines against dengue and other Ae. aegypti-borne diseases.

​Spatial area repellents: Through a collaboration initiated at Notre Dame, we have been developing new statistical inference and mathematical modeling tools to confront challenges associated with the development of spatial area repellents (SARs) for mosquito-borne disease prevention. To date, this has resulted in a paper in Parasites and Vectors and a preprint on bioRxiv. Moving forward, our work on this topic will be supported as part of a $33 million award to Notre Dame from Unitaid. Our role in this project will be to use models to analyze data from epidemiological trials and extrapolate those findings into impact projections of SARs deployed at larger scales.
3. Infectious disease dynamics in the context of global change
The dependence of vector-borne diseases on environmental conditions makes them highly sensitive to multiple forms of global change. The third theme of our research seeks to understand the interconnected nature of these dependencies 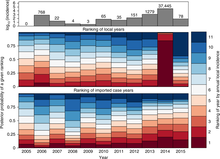 Ae. aegypti-borne diseases: We have been collaborating with researchers in China to describe and model dramatic inter-annual variability in dengue incidence there. To date, this has resulted in papers in BMC Medicine and Nature Communications. In particular, our work has shown that different drivers – imported cases, temperature, and mosquito density – each appear to limit or enhance transmission in different years. An important implication of this is that changes in any one driver may be unlikely to dominate the future of dengue's epidemiology in this or similar settings. We look forward to additional work to better understand the interactions among these drivers.
Midge-borne diseases: We are collaborating with colleagues at Colorado State University on a new USDA-NIFA grant, through the Ecology and Evolution of Infectious Disease program, that investigates how changes in ruminant communities in the western US impact the risk of epizootics of midge-borne viral diseases, such as bluetongue and epizootic hemorrhagic disease, in wildlife and livestock. An interesting feature of the viruses that cause these diseases is that, like influenza, their genomes are segmented. Because reassortment of genome segments can be pivotal in sparking an epizootic, understanding the conditions that promote reassortment may help us understand epizootic risk.
Powered by